Free Promotion Results for The Mediator

This past week, I ran a free promotion on Amazon (using KDP Select) for my book, The Mediator. This promotion ran between Wednesday and Friday. To maximize the potential of this three-day run, I contacted three (free) ebook listing blogs/websites, two of which responded and listed my book during the promo. Aside from that, I didn't do much else to promote the promotion, other than blogging and tweeting about it, which I don't feel had much impact on the final outcome, having less than 20 followers, half of which I know for certain weren't active on twitter during the period in question.

To begin with, my expectations had been set very low: I was looking to move around 100 units. And if the stars happened to align, I considered adding an additional zero to that figure. Well, I was surprised by the amount of units moved on the first day alone. By midnight Wednesday, the reports told me over 300 units had been downloaded. This caused my rankings to rise to the 1000s, eventually peaking at around #850. The following screenshot was taken just before I hit the sack for the day. 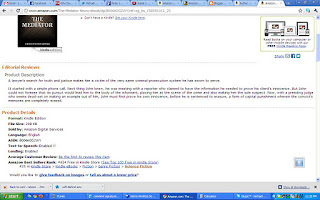 The remaining two days were nowhere near as remarkable. There was a steady decline in units moved on the second day, and a sharp decline by the third, and it became apparent that the ebook listings had been responsible for the initial surge in units moved. By the end of the three-day promotion, about 800 units had been moved, which isn't bad (I guess) considering the 3 units sold in the past three-weeks since publication.

Overall, I consider the promotion a success, if only because I have gained some much-needed exposure. Whether or not the 800 people who downloaded the book for free would go on to read it (and perhaps buy the subsequent two books in the series) remains to be seen. But at least I have succeeded in putting my name in the minds of these 800 people, which is the primary reason I'd put these books up on Amazon, to build some name-recognition by the time my current W.I.P. (and future releases) gets published.