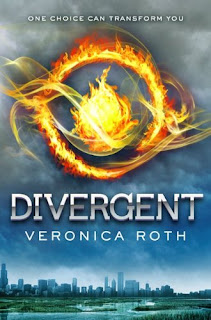 Last year, two important things happened that currently dictate my reading habits. Firstly, I discovered that there was this apparently-popular social network centered around reading and discovering good books; needless to say, I joined Goodreads in a heartbeat. Secondly, I got my hands on a Kindle 3. Since then, the number of books I have read have increased exponentially.

I discovered Divergent when it was voted the Best Book for 2011 by readers on Goodreads. In retrospect, this is why my expectations for it had been raised considerably. The end result is a book that falls just shy of living up to that expectation.

Divergent is a coming-of-age story about a 16-year-old girl called Beatrice Prior. It is set in a dystopian Chicago, though the city itself is never referenced by name within the context of the book. In that city, following an unspecified historical conflict, its inhabitants are divided into various ideology-based factions. The main character is from a faction called Abnegation, where selflessness is promoted beyond anything else, which is why they have been designated as ideal for leadership positions. Another faction, Dauntless, promotes bravery, and they comprise the main law enforcement body amongst other things. The Erudite faction are known for their pursuit of knowledge, and are at the forefront of research and scientific development. The final two factions are Amity and Candor, known for their peaceful nature and openness respectively. Then there are those who failed to get into, or were rejected by, the other factions. They are known as the factionless and are comprised of the homeless, who are treated like the dregs of society.

As part of a coming-of-age ritual, eligible youths are asked to publicly declare their allegiance to one of the 5 factions. This is the only time they would be allowed to switch factions, after which they must spend the rest of their lives upholding their chosen faction's ideals, or risk being declared factionless. Beatrice plans on switching from Abnegation to Dauntless at this ceremony, and who can blame her, when her current faction insists on wearing their selflessness on their sleeves, with their drab, gray outfits and monotonous lifestyle; the Dauntless on the other hand are known for their excessive body piercing, tattoos, black leather jackets and train-hopping. That's a no-brainer, right? Well, following a test that was designed to make the selection process easier, she discovers she is something called Divergent. This not only means that she is not suited for any one faction, but that she is considered dangerous by authorities as well.

She goes ahead to choose Dauntless, and the better part of the book is spent following her rigorous training underneath the Dauntless headquarters. Friendships are forged and rivals/enemies made, and a love interest is even thrown into the mix. And towards the end, a vast government conspiracy is uncovered and successfully foiled, all standard fare for this type of book. But don't get me wrong, I quite enjoyed reading this one all the same, even though I was somewhat disappointed with the lack of a stronger resolution.

All that aside, I know this is just the beginning of something potentially monumental. What does it truly mean to be Divergent? Why is it considered so dangerous by the authorities? Where do the factionless live and what role would they play in the future uprising? What lies beyond the perimeter fences guarded by the Dauntless soldiers? These are just some of the questions I hope would get answered in Insurgent, the next book in the planned trilogy.

Posted by Michael Abayomi at 13:30