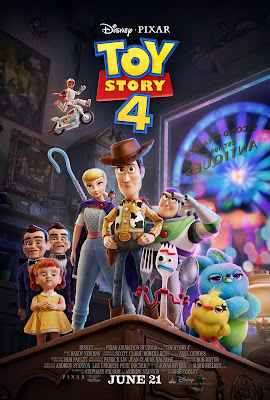 I was concerned from the very moment I'd heard that a fourth Toy Story movie was in development. I mean, the third movie had already been sold as the last one in the series upon its release, and it had ended so beautifully that it was always going to be impossible to match or surpass it. Well, leave it to the masterminds at Disney and Pixar to prove us wrong, as they've not only managed to craft a worthy successor, but one that also stands as a beautiful conclusion to the entire series in its own right.

Set two years after the events of the previous film, the movie finds Woody (Tom Hanks), Buzz Lightyear (Tim Allen) and the other toys from Andy's room already settled into life in Bonnie's room, the little girl who had taken ownership of them as Andy went off to college at the end of that film. It also opens by shedding some light on the circumstances surrounding Bo Beep (Annie Potts) and her departure from the group.

At the start of the movie, Bonnie is just about to start kindergarten and is struggling to deal with first-day jitters. This is not helped by the fact that she wasn't allowed to bring any of her toys with her. To cope with this, she creates a new toy in class, fashioned out of a disposable spork, some sticks and gum, and immediately grows to love and cherish this new toy, Forky (Tony Hale), above all others. But the toy itself struggles to deal with its newfound role, believing its place is inside the nearest available trashcan.

During a family road trip, Forky ceases the opportunity to act upon his suicidal tendencies, jumping out of their moving RV, and thus leaving Woody with no choice but to go after him. This leads them on an adventure where they come across an assortment of "lost" toys that include the imaginative duo Ducky (Keegan-Michael Key) and Bunny (Jordan Peele), the sweet but sinister doll, Gabby Gabby (Christina Hendrix), the stunt-crazed biker, Duke Caboom (Keanu Reeves), and a certain old flame whose reappearance has Woody reconsidering his place as one of Bonnie's often forgotten toys.

If Toy Story 3 was about accepting the inevitability of growing up and moving on from childish ways, then 4 is about rediscovering your inner child while embracing life and living it to its fullest potential.This is exemplified by its two main leads, Woody and Forky, and the fact that they have so much to learn from one another, despite being at different points in their respective lives. The ending of the movie didn't quite destroy me as much as the preceding one had, but the journey it took to get there was filled with more than enough heart, laughs and visual splendor to please children and adults alike.
Posted by Michael Abayomi at 21:10