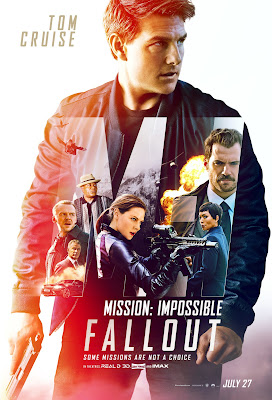 The 2018 summer blockbuster season is coming to an end, and what better way to end it than with what is arguably the best film of the entire season. Mission: Impossible - Fallout continues the high benchmark and current winning streak the franchise started with Ghost Protocol in 2011. Tom Cruise returns as the Impossible Missions Force (IMF) agent, Ethan Hunt, with Christopher McQuarrie also returning as director in what is effectively a direct sequel to his previous installment, Rogue Nation.

Set two years after Rogue Nation, Fallout finds Ethan Hunt and the IMF dealing with the aftermath of the criminal organization they took down in the previous film, The Syndicate. With their leader, Solomon Lane (Sean Harris), captured, the remaining members of the organization form the terrorist group, The Apostles. The movie opens with the IMF and The Apostles butting heads, as the latter tries to secure three plutonium cores off the black market, and the former tries to stop them.

The IMF ultimately fails its mission, and the members of The Apostles escape with the plutonium, which they were acquiring for a mysterious client known as John Lark. This causes the Director of the CIA, Erica Slone (Angela Bassett), to insist on shadowing Hunt and the IMF on their mission to retrieve the plutonium with one of her agents, the trigger-happy operative, August Walker (played by Henry Cavill, and his infamous mustache). The plutonium is to be sold at a fundraiser in Paris, by a broker known as the White Widow (Vanessa Kirby).

Hunt and Walker infiltrate the fundraiser, where they hope to retrieve the plutonium from the White Widow by impersonating John Lark, the buyer. They succeed in gaining her trust when they save her from several assassination attempts. But things become decidedly more complicated when the Widow reveals the price for the plutonium cores: they must first help her extract The Syndicate leader, Solomon Lane, who it turns out had been pulling the strings as he strives to bring about his doomsday plot.

Mission: Impossible - Fallout is not only one of the best movies in the franchise, but one of the best action movies to grace cinemas in recent memory, period. Tom Cruise proves once again that he is ever the viable action hero, performing his own stunts in some of the most jaw-dropping set pieces to be seen in any film. One of the biggest ones in the movie is the breathtaking HALO jump over Paris, which is impeccably shot and edited to reproduce that sense of vertigo and tension.

The same tension carries through the other set pieces and quieter scenes alike. And while the movie itself might feel overlong at nearly two hours and thirty minutes, it never seems to lose any steam as things continue to stack up at a breakneck pace. It is hard to see any other action movie topping this anytime soon, as it joins the ranks of Mad Max: Fury Road as one of the finest the genre has to offer.
Posted by Michael Abayomi at 07:52