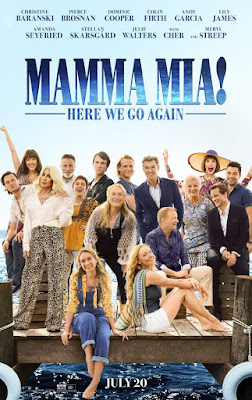 ABBA fans rejoice as the cast of the jukebox musical, Mamma Mia!, make a return to the Greek island of Kalokairi. Theirs is a bittersweet reunion though, as the story takes place one year after the death of Donna (Meryl Streep), frontwoman of the Dynamos and owner of the island's popular hotel villa, the Hotel Bella Donna. Much of the story is also told through flashbacks, and as such the movie functions as both a prequel and a sequel, with all the romance, comedy and musical numbers we've come to expect.

Since her passing, the Hotel Bella Donna has fallen into a state of disrepair, a situation her daughter, Sophie (Amanda Seyfried), seeks to rectify through a grand reopening she intends to dedicate to her memory. Things don't go according to plan of course, as the island is hit by a storm on the eve of the ceremony, undoing much of the preparations as well as preventing all the high-profile guests from being able to attend.

Sophie is also going through a rough patch in her marriage to Sky (Dominic Cooper). She receives counsel from her mother's best friends and bandmates, Tanya (Christine Baranski) and Rosie (Julie Walters), and through their tales, she learns much about her mother's misadventures as a young adult (played by Lily James) in the summer of 1979, and how she came to meet her three fathers, Sam (Pierce Brosnan), Harry (Colin Firth) and Bill (Stellan Skarsgård).

Mamma Mia! Here We Go Again is undeniably the best feel-good movie I have seen so far this year. The movie exudes the kind of charm that leaves a smile plastered on your face for the duration of its runtime. It doesn't hurt that I love ABBA and their incredible catalogue of hits. All that said, I must confess that I wasn't the biggest fan of the original film, which at the time of its 2008 release I found a little too campy for my tastes. Some of that campiness carries over into the sequel of course, but the musical numbers are so well executed here that you'd be hard pressed to find any reason to complain.
Posted by Michael Abayomi at 10:41