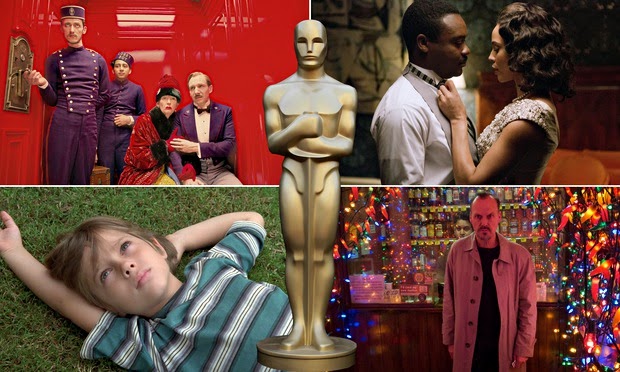 I was originally going to post my thoughts on the 2015 Oscar nominations tomorrow, but alas, I must give in to doing so while those thoughts are fresh and fiery. Out of a possible 10 slots, eight films have been chosen for consideration in the Best Picture category. These include awards' season favorites, Birdman, Boyhood, Selma and The Theory of Everything. Rounding the category out are The Imitation Game, American Sniper, Whiplash and The Grand Budapest Hotel.

Leading the nominations count with 9 nominations apiece are Birdman and The Grand Budapest Hotel. They are followed by The Imitation Game with 8, and then Boyhood and American Sniper with 6 nominations each. On the Best Actor front, we have the likes of Michael Keaton, Steve Carrel, Bradley Cooper, Benedict Cumberbatch and Eddie Redmanye all contending. For Best Actress its Rosamond Pike, Felicity Jones, Julianne Moore, Reese Witherspoon and Marion Cotillard.

There were snubs aplenty with films like Selma only scoring two nominations (the second one being for "Glory" in the Best Song category). Gone Girl was not only deprived of a Best Picture nomination, but a Best Adapted Screenplay nomination too. Also deprived were Jake Gyllenhaal and first-time director Dan Gilroy for Nightcrawler. But perhaps most alarming is The Lego Movie's snub in the Best Animated film category; as a sort of halfhearted consolation, the movie has been given a nomination in the Best Song category for "Everything is Awesome."

I could spend the remainder of this post lamenting the movies I was hoping to see get due recognition, but let's face it, it's impossible to please everybody. That is why I am choosing to appreciate the opportunity to explore the movies I wouldn't have seen otherwise. Of the eight films nominated for Best Picture, I have seen only three, Boyhood, Birdman and The Theory of Everything. I am updating my movies-to-watch list to include American Sniper, Whiplash and The Grand Budapest Hotel, just to name a few.

As things stand, I'll be rooting for Boyhood to win Best Picture. Not because I feel it is better than any of the other films in contention. In fact, the movie was for the most part devoid of any kind of story and I am quite surprised it managed to score a Best Original Screenplay nomination. But for the mere fact that it is a movie like no other, an epic 12-year shoot resulting in something that is frequently likened to watching a time lapse video. You can't help but shake the feeling the movie is a once-in-a-lifetime experience, and as such, it needs to receive top honor.

I guess we'll find out if it does soon enough when the awards ceremony airs next month, on the 22nd of February. Before then, I need to do some catching up. For a full list of all the nominees, you can visit: http://oscar.go.com/nominees?cid=oscars_nominees_announcement_cadillac
Posted by Michael Abayomi at 16:25