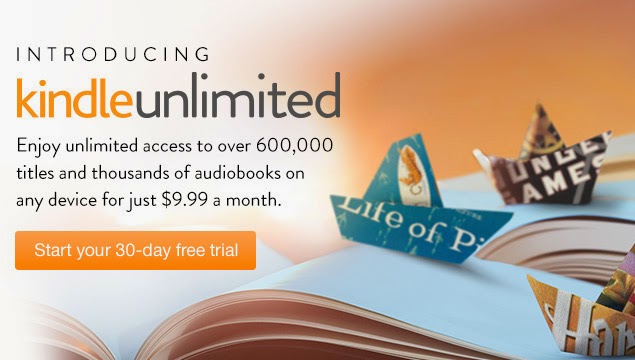 On Friday, Amazon launched a new subscription-based service for ebooks called Kindle Unlimited. Subscribers to the program can read as many books as they can from a pool of over 600,000 titles, for just $9.99 a month. This sounds like a pretty sweet deal for readers, especially those that tend to make their way through several books in any given month.

KDP Select was introduced in December 2011, and it gave self-published authors the ability to set their books free for a total of 5 days within a three-month exclusivity period, during which said books could not be listed for sale outside Amazon. At the time, it was considered a powerful promotional tool, granting those books that took advantage of it some much needed visibility.

In addition to these free promotions, those books that were a part of the program were also included in the Kindle Owners Lending Library, which allowed Amazon Prime members to borrow one book a month, completely free of charge. Authors were compensated for each borrow by earning a share of a global fund that was to be raised by Amazon on a monthly basis. Over the years, this has averaged about $2 a borrow.

Compensation for books borrowed under Kindle Unlimited would be calculated using the same system, with one important difference: the reader would need to read at least 10% of the book before the author earns his or her share of the fund. This is a requirement that is similar to that put in place by other ebook subscription-based services like Scribd and Oyster.

All that said, the big question is this: is the introduction of Kindle Unlimited enough reason to embrace KDP Select? Sadly, there is no definite answer to that question. It is something that must be assessed on a book-by-book basis. The good news though, for those already enrolled in KDP Select at least, is that your books have automatically been included in that pool of 600,000 titles.

I have a total of five books presently enrolled in KDP Select, none of which had been doing particularly well before now, so it would be interesting to see how their inclusion in Kindle Unlimited would affect their visibility and ranking. It is still too early to tell for now, but I'll be keeping a close eye on them from now on.
Posted by Michael Abayomi at 16:02