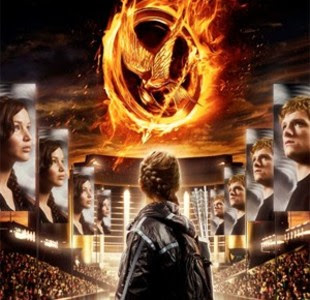 In the spirit of The Hunger Games hitting cinemas around the world today, I have decided to do a little commemoration. I only recently became a fan of the books, and had been meaning to post reviews of all three. But alas I have been busy writing three books of my own. Now, more than ever, seems like a great time to revisit our love of the two tributes from District 12 and their perpetually inebriated trainer.

Already billed as being the next big movie franchise following the success of the Harry Potter series and the Twilight saga, the makers of The Hunger Games movie adaptations have some very big shoes to fill. The problem with movie adaptations of this magnitude is that so many things could go wrong. I don't think I need to remind us what happened with Percy Jackson; even the presence of A-list cast members like Pierce Brosnan and Uma Thurman couldn't save that movie from its shoddy screenplay.

But we need to remember that even the earlier Harry Potter adaptations, while faithful to the books, were considered borderline substandard by many. And that the Twilight movies in general have been regular contenders for the Golden Rasberry (Razzie) Awards. In other words, I have already lowered my expectations and accepted that the movies might never come close to delivering the same level of thrill as the books. Even Harry Potter floundered on that front up until the very last one, where they decided to split the story into two movies.

There has been much comparison between Harry Potter, Twilight and The Hunger Games. Most of this is based on target audience and (projected) level of success. But the only real thing they have in common is the presence of two male leads and a single female lead. And with Harry Potter, the focus was more on the friendship between the three than on a conflict of love interests.

Let me just say this now. I absolutely despise love triangles. I feel they have been overdone in the realm of books and movies, and that in real life, they never play out in anyone's favor. That is, the person at the center of the triangle tends to lose both love interests. But at least the love triangle in The Hunger Games had a more realistic resolution. Unlike in Twilight, where they had to resort to fantastical concepts to resolve the conflict in a meaningful way.

Obviously, what drew me to the series was not the possibility of romance, but the concept of a televised (reality-TV-styled) event where 24 contestants must engage in mortal combat until there is only one left standing. Admittedly, this is a concept that has been done times without number. But hardly has it been executed in the context of children living in a dystopian future (aged 12-18). The only other book I know of was Battle Royale, a book I now find myself quite eager to read.

Despite being well aware of the premise behind The Hunger Games, I was still shocked by the things that went down in the Arena. I am quite eager to see how they transcend onto the big screen. I want to see Katniss almost getting stung to death by Tracker Jackers. And the horrific hallucinations that were to follow afterwards. And the Mutts. I especially want to see the Mutts. Hopefully, none of these things would get dumbed down and the movie would wear its PG-13 rating proudly upon its sleeves.

What about you? What are you most eager to see?

Posted by Michael Abayomi at 12:55